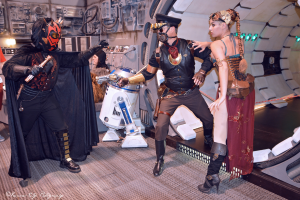 Steampunk has been taking the costuming world by storm. We had the opportunity to interview one of the most innovative Steampunk costumers around, Nathan “Capt. Solo” Seekerman, of Star Wars Steampunk Universe. As the winner of costume contests, a panelist at Star Wars Celebration Anaheim, organizer of charity activities, and feature of a photo spread in Star Wars Insider, Nathan offers us a glimpse into a galaxy not so far away.

Epic Geekdom Magazine: How did you draw inspiration for Star Wars Steampunk Universe

Star Wars Steampunk Universe: At San Diego Comic-Con International (SDCC) 2014 ,Chris Canole witnessed Nathan Seekerman receiving his very first Steampunk honor from the Starburners Galactic Society of San Diego for best costume, intrigued, Chris discovered his next Steampunk mashup: Star Wars!  Chris crafted a backstory of Darth Vader surviving his duel with Luke Skywaker…where he then retired on the beach, enjoying a life of Hawaiian Shirts, when Chris steampunked a used Vader helmet to pursue the bright side of the force.

Only a few months later Chris AKA Dude Vader and Nathan, at his second attendance of Her Royal Majesty’s Steampunk Symposium on the Queen Mary, met formally to begin their partnership to expand the Star Wars Steampunk Universe.  They realized working together attracted more interest, and if awareness of their characters could reach kids, charity work would need to be a major part of their focus.

What began as a simple day of posing with our photographer Kansas Johnson has turned into numerous interviews, charity appearances, television news stories and magazines layouts, most significantly being a two page spread in the August/Sept issue of Star Wars Insider. 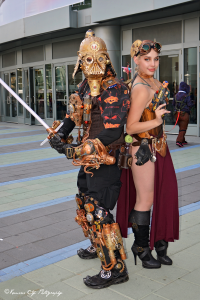 Then, on the one year anniversary of meeting, the core four; Chris, Nathan, Raina and Shaylor won the Costume Designers Guild award for best cosplay group in the Masquerade at SDCC 2015.  This accomplishment catipulted the public interest in our crew into unexpected new heights.

Currently, our charity activities involve the Special Olympics with the “Circle of Inclusion” campaign, ALS at Storm Stadium, a photo shoot for Autism  Awareness and most recently, Dude Vader attended the Foundation for Childhood Cancer’s event “Alex’s Lemonade Stand Foundation”.  Then followed it up with recording a Public Service Announcement for S.T.E.A.M. Makers Fair for kids. Lastly, we have linked up with Gentlemen of the Force, Ladies of the Force and Make A Wish foundations.

EGM: Initially, were you more involved in the Steampunk genre or Star Wars fandom?

EGM: How do you make your costumes so fresh and exciting, when star wars is one of the biggest and longest running fandoms?

SWSU: Each member of #SWSU has a unique style that allows us to maintain similarity and cohesion as a group, while including our Steampunk values in a Star Wars based mashup. Many of us draw on Victorian design directly, then follow individual character backstories, helping to motivate the decision over whether something is brass, lace or copper. We maintain the rich tapestry fabrics of the Victorian era and find our color palette in the browns and blacks that come through in the leather work.

We idividually pinpoint  specific aspects of the classic characters, and make sure to include said aspects into the overall design. Once you have those signature pieces, the rest of the costume lends itself to the cosplayer’s artistic liberty. The result is a character familiar enough to be recognized, but with enough personal artistic (steampunk) flair to be something new.

Chris encourages new members to expand their visual imagination through creating a back-story for their characters utilizing classic Star Wars mythology transformed into our Steampunk Universe.

EGM: What professional or hobby experience has helped you create such fascinating costumes?
SWSU: We are all storytellers and readers who love to let our minds wander into imaginative worlds, enabling us to stay in touch with our creative side on a daily basis. We all have different skills we have picked up along the way, with some of us skilled in metalworking, leatherworking, or sewing….and some of us really just know our way around a glue gun and a can of spraypaint.

Chris is a SAG actor and WGA writer, while others have worked in the film industry as well as stage-theater experience…all of us enjoy the creative writing process. We have found that when dreaming up stories in a Steampunk genre, you can change, bend, and break all the rules.  The options for the characters and stories we can tell are absolutely endless, empowering our creativity with no limits.  In fact, we are inspired to look at the world of Star Wars and re-imagine any possible story line.

EGM: What would you recommend for someone new to Steampunk?

There is no wrong way to Steampunk a character or genre!  Find that, hat, corset, vest, weapon or apparatus, and inspire your imagination.  From that inspiration,  develop your character’s backstory: “I’m a mechanic, princess or an airship pilot.”, then you’ll see how elements — such as a wire here, or nuts and bolts there — can become great features of an outfit..  Steampunk can be bulky, because the power source is the steam engine and  things must be bigger and more elaborate. Remember, more often than not, what you create is for primarily for posing, so a steam engine backpack can be made from lighter materials for aesthetic effect.

The best advice for cosplaying steampunk, or even your next Halloween costume, is to search for all the plastic treasures that might be stored in your closet or garage. Start looking at things for their creative potential, what they could be, not necessarily as what they are: hardware stores, garage sales, and junk yards are a treasure trove for Steampunk designers.  With a little paint, a few stitches, and glue, they too, can become costume parts or Steampunk devices – a blaster, rocket pack, or even your next suit of armor!

EGM: What would advice would you give younger costumers?
SWSU: Have a big dream and go for it! Draw it up!  You can start small with your favorite toy, book or tv show, then let the ideas about your unique Cosplay take shape.  Don’t worry about getting it perfect the first time, because there is always a chance to update costumes and add more to your idea. After all, the best costumes evolve and become better with time. Dude Vader changes his outfit every week, adding or removing what works best. Also, test out your costume’s comfort level before the even. It’s nice to look really awesome, but it’s not fun to be miserable and sweaty. If you can make it more comfortable beforehand, you will have a better experience.

EGM: How do you integrate career and cosplay?

SWSU: For each of us, that is a very different answer.  Shaylor, who portrays Baron von Maul, has first hand experience working with steam from his time as a master plumber in New England.  Many buildings and homes in the North East  use steam heat to this day.  His former trade provided him with metal, soldering, and brazing skills, which he works into his costume creations, along with the knowledge of the functionality of authentic pieces one would actually see on a steam boiler.

Eiraina is currently in process of pursuing a college degree and a license in Barbering. So while costuming is not directly involved in her career path, she devotes her spare time to it.

Chris is an artist, drawing for clients like the Smithsonian Museum, Pope Francis and the International Olympic Museum. He utilizes the styles he’s developed while sculpting one of the Batmobiles and movie sets.  When he is not writing scripts, after all.
Nathan is a computer programmer who designs websites and phone apps. Since this occupation doesn’t neccessarily have a creative design outlet, Steampunk has been a place to pursue creative endeavors. 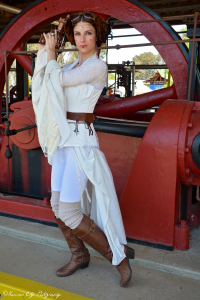 EGM: What inspires you?

SWSU:     Eiraina has always found inspiration in the world of science fiction; She grew up watching many western movies, classic horror movies, and older movies about science-fiction adventures with her family. When she discovered that Steampunk accommodated all of her interests about the captivating worlds these movies were set in, she quickly immersed herself in the Steampunk subculture.

Shaylor has been a huge Star Wars fan since childhood. He has embraced the Originals trilogy, the Prequels, the television shows, and the books that have shaped the world created by George Lucas as we know it today.  For this cosplaying couple, the Star Wars Steampunk mash-up seemed like the ideal way to share their interests with one another and learn something new in return, all while doing something they both have a passion for.

Chris dedicates almost all of his spare time to charity activities, donating drawings for fundraiser, making appearances as Dude Vader, and teaching local kids how to expand their creativity.

Nathan learned early in college that  there are many sides to a healthy life, so he likes to put his energy into family, friends, business, and faith to create a balance. Charity workis a primary component to showing your faith in others.

Question: What has been the highlight of your cosplay career?
Our concept as a group has been extremely well-received by everyone we meet… but none so much as the kids. Seeing kids’ smiles is unlike any other experience. Because they are not judging “is this steampunk?”,  rather they just find that they “like it”!  That, in and of itself, is the reward…you never know whether hat youngster may grow up to be the next J.J. Abrams.  Handing them a card (with an imaginative photo of us in an exotic setting)  always seems to make them feel like something special happened, and we’d really hope that is still the case for all of our upcoming conventions! 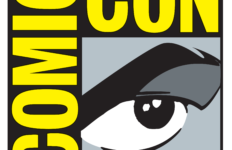