Nerds, meaning myself and everyone who loves all things Guillermo del Toro got a nice little surprise on Thursday.  Just after his Art Tribute show: In Service of Monsters in LA, del Toro is in New York doing Crimson Peak pimping and fans were pleasantly surprised to find a tweet from the man of many tentacles: Guillermo del Toro.

There had been a deluge of imposters claiming to be del Toro and apparently he wanted to create his own so as to be able to talk to his fans.

del Toro’s assistant, Ian Gibson tweeted the picture of GDT on Gibson’s laptop: this is him posting it! My computer, his damn tweet!  Rock on @realGDT! 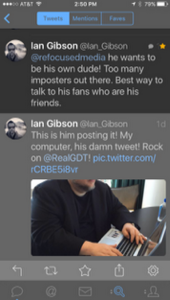 Del Toro was verified soon after and had 40 thousand followers by the following morning.  Up until Thursday, tweeters who wanted reliable info on GDT got some from his assistant’s own twitter account @ian_gibson or follow people in his camp like @gdeo and @deltorofilms 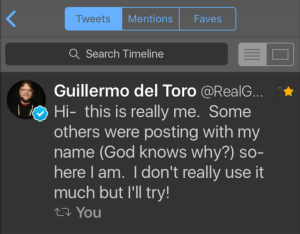 Hi- this is really me. Some others were posting with my name (God knows why?) so- here I am. I don’t really use it much but I’ll try.

Everyone in the know understands that GDT probably won’t be a fervent tweeter.  But it’s nice to know the real guy is out there.  Fans can and still should go to @deltorofilms or @gdeo for GDT news and his many, many project updates.

del Toro does this before his Gothic masterpiece Crimson Peak opens October 16th and right after word came out that Universal “yellow lit” (delayed production due to cost) for Pacific Rim 2, which was in pre-production mode.