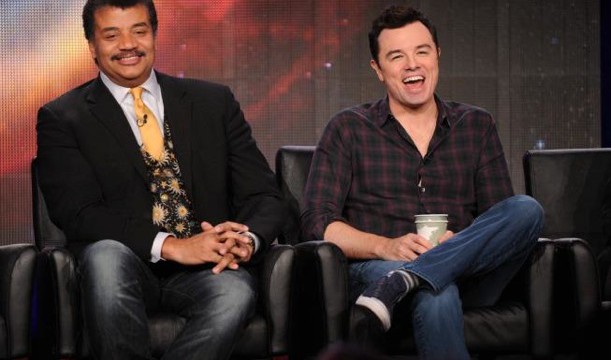 This week, Neil interviews Seth MacFarlane, the brains behind Family Guy, A Million Ways to Die in the West and an executive producer of COSMOS on FOX. They reminisce about meeting at the Science and Entertainment Exchange and how Seth brought Neil into FOX – in spite of Neil stealing Seth’s French fries. They discuss the surprising, hands-off attitude the network took towards COSMOS. They also cover animation, commercials and other aspects of making the show. The conversation isn’t limited to COSMOS: Neil and Seth talk about the starry skies in A Million Ways and Ted, and the science and science fiction running through Family Guy. You’ll get the story behind “Cosmos for Rednecks” and how Neil became the “science consultant” on Family Guy’s “The Big Bang Theory” episode. You’ll hear about how important music is to all of Seth’s projects. Plus, Seth does his impersonation of Carl Sagan and talks about “cheating death” on 9/11.

Discovery Expected To Lay Off 70% Of Staff & Terminate Scripted Content at HBO Max… Will You Keep Watching If It’s Mostly Reality TV?→