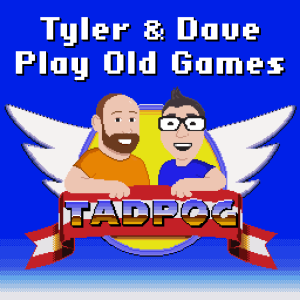 “Illusion of Gaia” from TADPOG by Tyler and Dave. Released: 2013. Genre: Podcast.

“The Death and Return of Superman” from TADPOG by Tyler and Dave. Released: 2013. Genre: Podcast.

“Super Star Wars: The Empire Strikes Back” by TADPOG.

Every Wednesday we release a new episode where we talk about a different Super Nintendo game. More specifically, we are going through IGN’s Top 100 Super Nintendo games in order and dedicating an episode to each game. We also just started publishing episodes on Monday where we talk about games that are not on the Top 100 list. Sometimes these games are Super Nintendo games, sometimes they aren’t. It wouldn’t be a podcast if our discussions didn’t meander… typically they meander straight into the gutter. We exclusively publish with the Explicit tag. I co-host the show with Tyler, one of my best friends.

We both live in Paducah, a town in western Kentucky. Paducah is known for its quilts and neither of us quilt, so it’s only logical that we were both gaming before we could read. We have been doing the show for almost a full year and have published 56 episodes (soon to be 57 tomorrow). We have loyal and creative listeners. A band named Megalixir submits their rendition of a classic Super Nintendo song every ten episodes, Tyler and I have appeared in a web comic called Retail Hell, and we will be appearing as a two-headed monster (an ettin, if you will) in an upcoming iOS game that is currently being developed by a listener.